Over 50 years ago, at the end of the Second World War, one of the most overcrowded parts of Buckinghamshire for primary children was the part east of Amersham, bordering Hertfordshire, where there had been a great deal of new building around the Chorleywood and Little Chalfont areas. At the time, the only school which could provide for them at all was a very small village school at Chenies. 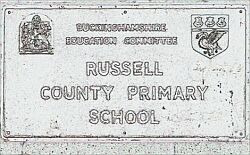 There was also a great shortage of places on the Hertfordshire side of Chorleywood, and Amersham itself had an increasing school population, no secondary modern schools and two old Church schools, which had to provide for all the younger children.

It was decided before the end of the 1940s, with Hertfordshire, that the best place to build a new school to provide for children in Little Chalfont and Chorleywood was in the Buckinghamshire part of Chorleywood, where many of the new houses were. Consequently, the present, beautifully situated school site was chosen and reserved.

At last in 1951 the contractors went to work and the main building went up, the first post war primary school built in the Amersham and Chesham Division and one of the first in Buckinghamshire. It was rightly much admired and acclaimed when it was officially opened on 1st July 1953. Because of the long association of the area with the Dukes of Bedford, the school was happily named The Russell County Primary School.

The school was officially opened on 1st July 1953.  The school grew from strength to strength. It established a reputation for Mathematics teaching which attracted educational visitors from all over the country. It also collected a wonderful display of books. The corridors were lined with shelving and filled with an enormous selection of texts, which drew admiring attention from HMI who carried out a full inspection of the school in March 1963. "No praise can be too high for the effort and care that have gone into the establishment and maintenance of the library!"

During this time the school underwent the first of two major changes. In September 1973, following the introduction of a three tier system of education by Buckinghamshire, the primary sector was remodelled and the school reopened as The Russell County Combined School. For the next 18 years the school operated as a First and Middle school catering for children from ages 5 - 12.

This also signalled an intensive building programme, which extended the school's accommodation to cope with the additional year group and enabled the school to offer the appropriate curriculum opportunities for children who, a year earlier, would have attended a secondary school.

This period saw the building of the New Hall and the Satellite Block. with additional teaching areas and the provision of a science laboratory in the main building. It was not an easy time for the school.

As noted in the school log book of 6 September 1973, "With the raising of the school leaving age to 16, the County has reorganised primary education into two stages : First school (5 to 8) and Middle School (8 to 12). The Russell School, with effect from September 1 becomes a Combined (First and Middle) school!  The transfer age for pupils residing in Herts will remain at 11+. The additional accommodation required to cater adequately for the additional (12+) age group is now under construction. It is not likely to be completed until Easter 1974. In the meantime, two classes of 12+ children will be accommodated in the main assembly hall (New Hall) and all indoor PE/Dance/Movement sessions (including those taking place as after school activities) will be cancelled. It will be possible to hold some morning assemblies in the dining hall, but this accommodation will be mainly used for music."

The school continued to serve the two halves of Chorleywood for the next 18 years when, following recommendations by the Boundary Commission, it was decided to change the boundary to bring the whole of Chorleywood into Hertfordshire.  In April 1991, The Russell School ended its days as a Buckinghamshire school. But not quite...

Following concerns raised by parents about losing the 12+ option for places in the Buckinghamshire Grammar school system, it was agreed with Hertfordshire LEA that pupils could stay on for an extra year and take the 12+.  This arrangement continued for the next few years until 1999 when Buckinghamshire reverted to transfer at 11+ and consequently the school became, once again, a primary school. Today, following the addition of the Nursery in 1998, the school caters for pupils from 4 - 11 and is now, once again, known simply as "The Russell School".

Over the years, a total of 12 Headteachers have taken the helm, each one contributing to and maintaining the excellent reputation the school has endured throughout the last 50 years. For some their stewardship was brief, but certainly the longest serving has been Mr Peter Donaldson who was responsible for the school for 16 years from 1965 -1981.

Find out more about John Russell